Please Remain Calm, a new Leeds based five piece rock band announce their arrival with a debut single that could knock the Incredible Hulk into next week and smash Thor’s hammer into a million pieces! I cannot see anyone remaining even moderately calm when gigs return and Please Remain Calm hit the stage. This is a huge metal anthem in waiting, riffs forged in the obsidian bowels of Mordor and a rhythm section that could not get heavier if they tried. There is an orchestral feel to the melodies, especially in the chorus. Flowers (a.k.a. Chloe) gets better every time I hear her, either solo or as the front woman of incredible York band My Wonderful Daze. On this track she channels her inner Amy Lee and frankly is as good, if not better than some of Amy’s finest Evanescence moments. On the strength of this single Please Remain Calm have the ability to be huge and I hope they are!

Chloe Munt the electrifying lead singer and spectacular front woman of one of York’s finest bands, My Wonderful Daze has a new solo single out as Pick The Flowers. It is called “Belladonna” and just like her band it pretty much defies genre boxes. It has an electronic dance vibe with a kind of chilled lofi attitude. Belladonna is the name for one of the most poisonous plants on the planet, Deadly Nightshade and it is also Italian for beautiful lady. A single leaf off the plant is enough to kill a healthy adult due to the high concentrations of alkaloid toxins which cause havoc in the nervous system. The word itself is a a total contrast and it is this that Pick The Flower’s lyrics for “Belladonna” deal with. Particularly, I believe, the contradictions that exist in a relationship considering both the beauty and the toxicity that can exist in any relationship or tryst between two people. There is dark passion, frailty and venom in the lyrics. “Belladonna” is an absorbing tune the roots of which slide unnoticed into your temporal lobe and make a home there. So from the name of a killer plant comes a killer single. This song is the vanguard of something very special from Pick The Flowers, bring on the album!

Tonight was the third time that I had seen My Wonderful Daze in less than three months, the first time was also at the Fulford Arms for their Hands Off Gretel support slot back in July. Tonight was a show to let the band showcase their new EP “Guilty Party”. But before I tell you about their set there is the not so small matter of the support band, Freek. I first saw them in December last year, supporting Percy. Freek‘s roots can be traced back to Led Zeppelin and onward through to the White Stripes. Lead singer Ellis Best may, on the first impression, look like a mild-mannered Librarian, but then he unleashes blues-rock licks from his guitar which have the power to cause earthquakes in heaven and hell. But that isn’t all when he opens his mouth to sing out pops a voice that could match Roger Daltrey, Ozzy Osbourne, Paul Rodgers and many more. Best is one hell of a talented rocker. Drummer Christy Bloomfield is like the perfect rock ‘n’ roll metronome (and that is meant as a compliment.) He comes across as a well-controlled sticksman and then he hits those drums with a crazy, frenzied passion and you can imagine him being possessed by the spirit of Keith Moon and the wisdom of Ginger Baker. The highlight for me, and there were many, was “I Am A Weirdo” which is as close as you can get to the perfect rock song!

Just before 9 o’clock, the crowd was palpably excited as they waited for the imminent arrival of those weird, wacky and wonderful folk from Planet Daze, yes it was time for My Wonderful Daze to hit us with their best shot. Incidentally, their best shot is like being attacked by an artillery barrage of riffs, a rhythm section that could power a whole division of tanks and all this marshalled by Field Marshall Chloe Munt a.k.a. Flowers. This is a full-on shock and awe aural assault that either wins you over or forces you to surrender. They played the five songs from their new “Guilty Party” EP first. “Tommy” starts off quite soft and builds into a crescendo of dark passion backed by a band firing on all cylinders. The five-track EP is stunning and in the live environment the already uber heavy, riff-laden, hook-driven, eldritch tunes transform into something heavier, darker and psychedelic. At times they sound like Black Sabbath had Ozzy been replaced by Chloe.

My current favorite track from the EP is “God” and live it is an epic masterpiece. The crowd was up for this band in a big way. Chloe made a number of excursions into the audience and the crowd went into manic mosh mode towards the end. My Wonderful Daze lived up to a previous description from me “Imagine what band might arise if Florence and the Machine had been kidnapped by DC’s Suicide Squad and the Joker injected them with a mix of a large dose of heavy metal and Kurt Cobain’s DNA.” But they went even further than that tonight. In the week that ‘IT – Chapter Two” hit the cinemas there were plenty of Pennywise style red balloons with added black balloons to add a streak of goth. The second half of their set saw much fake blood, well at least I hope it was fake! This was streaked across the faces of the band and Chloe sporting red hair rocked a perfect Carrie White post-Prom Queen scene in a blood dripped white dress. This was not just a gig it was a show with some really theatrical moments, not many bands can pull that off, but My Wonderful Daze can do it with style and ease. There was a technical guitar hitch near the end, but a mighty and dynamic jam session from Mr. Jack Sparkle on bass and JoshQ6 on drums and Chloe taking it upon herself to dance with members of the audience entertained us impeccably while the guitar issue was resolved. For me, the mark of a great band or at least one with the potential to become great is how they handle a mishap like that. My Wonderful Daze handled it like seasoned veterans. They finished with a rip-roaring cover of Dolly Parton’s “Jolene” closer to the White Stripes arrangement but with the heavy and dark turned up to full! You really need to see this band, but while you are waiting check out the “Guilty Party” EP by clicking here 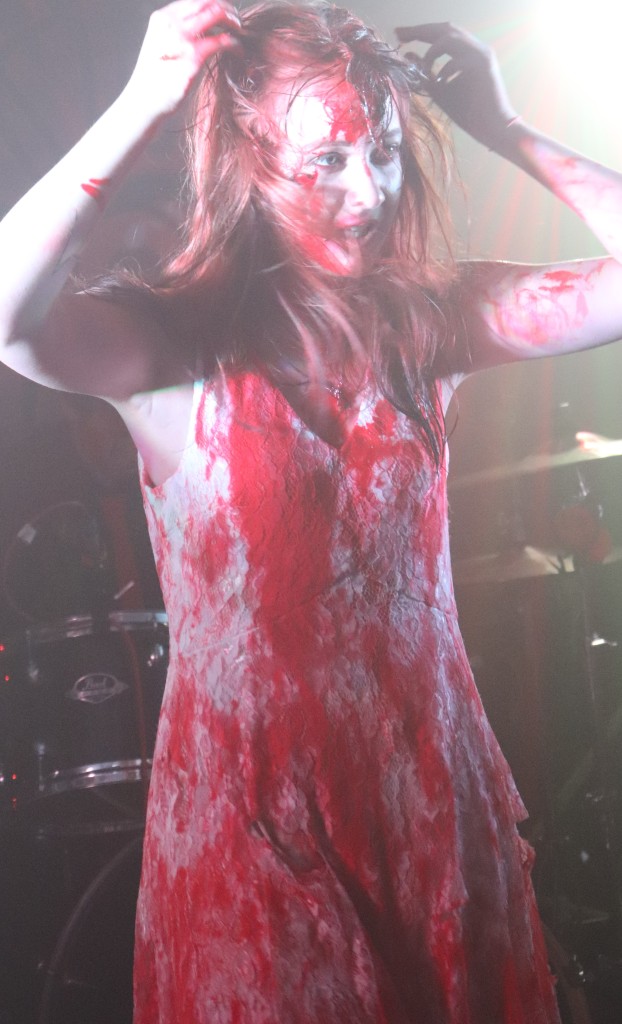 All the photos apart from the EP promo were taken by me. The videos were all found on YouTube, if one of them is yours and you would like a credit or for me to remove it please let me know.