Welcome to the weekend good people, bad people and those who aren’t sure. It’s time to let your hair down for a couple of days, well metaphorically in my case! It’s 14th March and just one day away from those dastardly Ides, so remember to stay bewared so to speak.

Did you make a donation to Comic Relief yesterday? If not it’s not too late and if you did feel free to donate more. Just click here and remember just £5 will buy a mosquito net for an African child. This could help to eradicate Malaria which is one of the biggest killers of children in Africa. Just think that if everyone who read this blog yesterday donated just £1 that would total £450! For the latest update on Comic Relief click here, the ‘on the day total’ topped £57m!

I have a confession to make about last night’s show though and I can’t believe that I’m about to say this. But Robbie Williams was bloody good last night in the Little Britain sketch. To be fair he wasn’t singing, thankfully but nonetheless he was good. Click here to see the sketch. What do you think of it?

We continue todays post with a few contributions from some regular readers. Firstly thank you to Tom who passed on a great video and indeed a potentially great band today. We were talking at the Hospital Radio Station on Wednesday night about Ringo Starr’s solo efforts, which in my opinion have been somewhat patchy. Anyway Tom mentioned that there was an excellent video on YouTube promoting the current single from a band called Blame Ringo, click on the song title to see it, it is all filmed at the famous Abbey Road zebra crossing that was featured on the cover of the Beatles Abbey Road album. The song is called “Garble Arch (A Day In The Life Of Abbey Road)” So tell me, how many of you have had your picture taken on that crossing? Feel free to mail a copy to me and I’ll happily publish it in the blog for you. Blame Ringo’s website is pretty good too, click here to check it out.

I found this while I was searching for a Blame Ringo picture. So I had to include it. Why? Because I can of course! Indeed it even features Catwoman as well

Secondly here’s a great tip off from Nick H who lives in what used to be the hometown of Mary Shelley who wrote the rather spiffing Frankenstein. Nick has given us an excellent link to a brilliant cover of Gary Numan’s “Are Friends Electric?” by Jack White’s new band ‘Dead Weather’. It consists of Jack himself, obviously, Allison Mosshart from the Kills on vocals, Jack Lawrence from the Raconteurs and Dean Fertita from Queens of the Stone Age. Click the song title for the video and click here for the band’s web site. 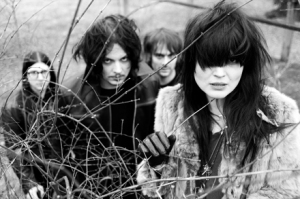 Jack tried to warn Allison that she was about to feel a little prick....... from the thorn bush of course, you readers are just sooooooo rude! 😉

And finally for those readers contributions here is a brief one from Marcy. She wanted me to let you know that she lives a mere stones throw (well if you can throw a stone 7.1 miles) from Mr Davy Jones off of the Monkees. Davy also plays a few shows in Marcy’s home town too. Do any other readers live near a celebrity? Let me know and maybe I can include it in a future post 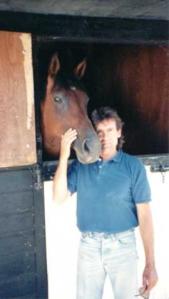 A horse walks into Davy's Bar and orders a beer, Davy serves him and says "why the long face?"

Anyway let’s move on with the trivia and useful/ useless (delete as appropriate) information for today.

Firstly the birthdays and today is the 63rd birthday of Jim Pons who was the bass player for classic 60s band the Turtles who had a massive hit with the classic (ok so I’ve overdone the classic superlative, so what?) “Happy Together”. Jim didn’t join the band until after that though. He was also a member of Frank Zappa’s Mothers Of Invention. The Turtles first hit was a cover of Bob Dylan’s “It Ain’t Me Babe”. Before this they were called Crossfires From The Planet Mars. Another classic Turtles hit was “She’d Rather Be with Me” which does indeed feature Jim on bass.

Everyone else had walked across the Abbey Road crossing, but the Turtles had to show off by crawling across

The second and last of our birthdays today is the 26th birthday of Jordan Taylor Hanson. He was, somewhat obviously, a member of Hanson who had a massive hit with “MMMBop“. I must confess that I love that song, a true guilty pleasure is that one I suppose. Does anyone else admit to liking it? Jordan preferred to be known by his middle name Taylor and he was just 14 at the height of “MMMBop’s” success. The band have the honour of appearing twice in TV’s Celebrity Death Match. The first time they fought the Spice Girls and both they and the Spice Girls were killed by a chainsaw toting Marilyn Manson. Bizarrely they came back for a rematch with Manson (hey I wonder if it was billed as Manson vs Hanson?), they lost again after Zac Hanson lost control of the chainsaw. Please note that Celebrity Death Match was not real and no stars were harmed during the making of it. Although there are some I would like to see on a real version! any guesses or suggestions? Incidentally fact fans, “MMMBop” has been featured as House’s mobile phone ring tone in House MD.

On this day in 1985 the mighty Frankie Goes To Hollywood played a show at the Sheffield City Hall in the UK. The band were absolutely mega in 84/ 85 with their first three singles all reaching number one in the UK. At that point they were only the second group ever to achieve that feat after Gerry and the Pacemakers in the 60s. There are various stories as to how the band got their name all relate to a newspaper or magazine headline of a star going to Hollywood. To be perfectly Frank it was one of the following Franks; Frank Sinatra, Frankie Vaughan (one of my Mum’s favourite singers!) or English comedian Frankie Howard (titter ye not!). “Relax” had reached number 6 in the UK charts after an appearance on Top Of The Pops and then the infamous Mike Read banning incident occurred. Allegedly Mike objected to the sexual content of the lyric, this of course gave the band and the song such publicity it shot to (read no innuendo into that smutty people) number one, where it stayed for 5 weeks. The follow up “Two Tribes” went to number one and stayed there for a phenomenal 9 weeks at the same time “Relax” climbed back to number 2. The third single “The Power Of Love” was number one for a short period in December 1984. It’s nativity themed video means that is still seen as a Christmas song by many, but I’m not convinced! The rise of Frankie also led to a proliferation of ‘FRANKIE SAY……’ Tee shirts. Here are the Frankie’s with “Relax” on Channel 4’s the Tube in late 1983.

And finally on this day in 1991 REM played the first of two nights at London’s Borderline billed as Bingo Hand Job. Not only did they come up with a different name for the band they also gave each other new names for the shows; Michael Stipe was the Reverend Bingo, Peter Buck became Raoul, Bill Berry was the Doc and Mike Mills had the honour (?) of being Stinky. Out of those I would rather have been called the Reverend Bingo but a number of people have told me that Stinky would be more appropriate. Hmmmmmm I’m not sure why that is 😉 Anyway to finish here are REM with the Muppets on a cracking version of “Furry Happy Monsters”

Michael had heard that many dog owners resembled their dogs, but.......

..... he hadn't realised that he was starting to look like his gargoyle!