This year was the first time I have been around for Live At Leeds and thanks to my good friend John Hayhurst I even got a cheap ticket. On top of that John’s research on the bands, singers and venues was immaculate. After collecting our wrist bands at the First Direct arena we headed to the Key Club. The first band on stage were Forever Cult. I would describe them as a bit grunge, a bit indie and a bit classic rock. They were bloody good, “Yasmin” is a great song. All three were excellent musicians but the drummer attacked his kit like a reincarnated John Bonham. He even had a look of the great Bonzo about him too.

We were entertained on the same stage next by the Treason Kings. They are full on heavy, hard and hairy rock at its best. Maybe with even a bit of a prog twinge. I mean who else but someone with an awareness of prog history would write a song about their chest of drawers called “Chest Of Drawers”? An excellent band in my opinion.

After that it was a brisk walk to the O2 Academy for Gaz Coombes. I have seen him a few years ago when he was still with Supergrass, now they were a great band weren’t they? Mr Coombes solo is different from Supergrass but still su-fucking-perb.

The Belgrave Rooms took us in next. We caught the last pert of Alex Burey’s set. He is a young london singer songwriter who is a bit like a jazzed up and more funky Jake Bugg with an extra added Orange Juice/ Edwyn Collins. Chloe Black was what drew us to the Belgrave. She owned the stage with her striking monochrome look and wowed us with just an iPad and a keyboard. For me she has a range of influences from Amy Winehouse to Bjork via Ballad Madge (a.k.a Madonna) She seemed a little nervous at first but it was a really packed house. 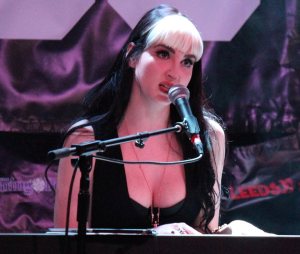 We made a dash to get to a small bar called Milo’s for the highly recommended Crybabycry. The bar is quite small and rammed to the rafters with punters. That might have helped or hindered a performer or band. But I believe Crybabycry raised themselves for it. They are a truly stupendous band. Their songs are often underpinned by a classic glam rock drum beat from a very talented drummer. All three are very talented musicians and their songs are wonderful. I can hardly wait to see them again, but I will see them next month at the Apollo Festival in York. 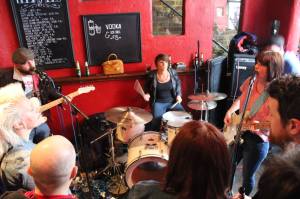 After this and a brief burger stop we whizzed over to the Holy Trinity Church where we stayed for the rest of the afternoon and evening. Being an old church the acoustics are fabulous. Frances was first on for us. Great voice – Tick, great pianist – Tick, Great songs – tick. She clearly ticks all the boxes for me and has the gifts and talent to be really successful. 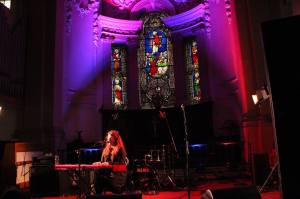 The second act we saw in the Holy Trinity Church was Freddie Dickson and the Guard. What a fucking amazing find they were. I thought that I was detecting shades of Coldplay and Radiohead and then I thought nope these guys are very much of their own making. I believe that they are probably one of the best young bands that I have seen in years and believe me I have seen some great young bands; Avalanche Party and the Tuts to name but two. Freddie’s voice is off the scale of phenomenal rock voices. This band really ought to be huge!

Having settled in to our prime spot on the pew just in front of the stage we were next entertained by Seafret. They might look a little like Simon and Garfunkel but they come across like a turbo charged and folky McAlmont and Butler. They are from Bridlington, they are Seafret and they are bloody marvellous.

The penultimate performer for our time at Live At Leeds was Laura Doggett. She has a brilliant band, an amazing voice and her songs are truly captivating. I felt there were quite a few influences in her songs and performance; Florence, Kate Bush and Stevie Nicks. It was a superb set, the one thing that didn’t work for me though was the often very twee between song conversation.

Finally it was time for Lucy Rose, or perhaps it wasn’t time. The were a multitude of equipment problems for which Lucy apologised, although clearly it wasn’t her fault. Eventually she had the techie set up a microphone and an acoustic amp, whereupon she came out and took requests, from her first album. Not many artists would have the commitment and the balls to do this, let alone actually pull it off. But Lucy Rose really did make it work. Eventually the equipment problems were sorted and she was able to perform some of her planned set. Lucy Rose; a trouper, a true performer and a great singer-songwriter. The packed audience loved her and frankly so did I. 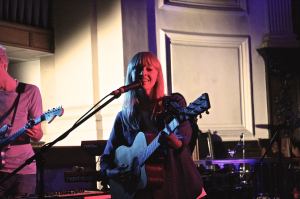 And finally it’s the public service announcement. All the videos ( a selection of artists that we saw on the day) are courtesy of YouTube and all the photos are courtesy of rock photographer John Hayhurst. (I borrowed them from your Facebook page Mr H)